Fed Chair Yellen’s testimony in Jackson Hole and Hurricane Harvey dominated the headlines today.  Yellen’s speech, which could be her last as acting Fed Chair at the Jackson Hole forum, felt more like a farewell rather than an audition for a second term, as she defended the post financial crisis regulation, and disagreed with President Trump’s assertion that it has stunted economic growth.  Yellen said that any future regulatory changes should be “modest”, suggested simplifying the Volcker Rule and providing relief for small and medium-sized banks as potential areas for improvement.  Yellen was silent on monetary policy, which caused the dollar to weaken as market participants ratcheted down expectations for a rate hike at the September FOMC meeting further.

Oil prices rose close to 1% as the gulf coast braced for Hurricane Harvey, which is predicted to hit Texas Friday night or early Saturday as a Category 3 hurricane.  The storm is projected to be the largest to hit the US mainland since Wilma in 2005, forcing refineries and other production operations to shut down in preparation.  Despite the short-term impact on US supply, the global supply glut remains in full force.  The joint OPEC and non-OPEC monitoring committee is reportedly considering an extension on its supply pact beyond March, although a final determination is yet to be made. 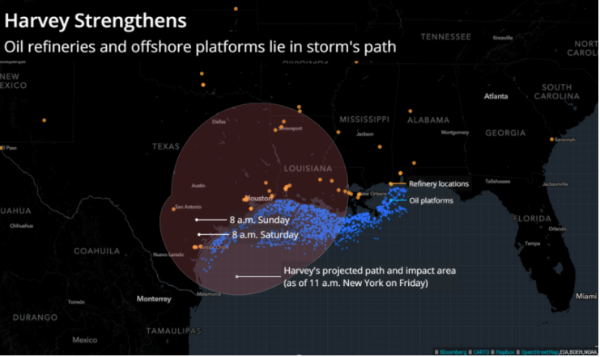 Durable Goods Orders highlighted today’s US economic data releases.  The headline number missed consensus estimates (-6.8% vs -6.0%e), but the miss was due to the volatile transportation category.  When stripping out transportation, core capital goods orders rose 0.4% MoM, the seventh consecutive monthly gain.  Core capital goods shipments also experienced their largest increase since February.  Overall, the report was viewed as a net positive and could set the stage for stronger-than-expected Q3 GDP.

Have a great weekend.