The Slippery Slope for Crude​

There was no holiday spirit to be felt in energy markets today as crude oil prices tumbled as much as 7% to their lowest levels of 2018.  Much of the concern that has led to the near 20% drop this month has been supply-driven, despite the expectation for members of OPEC and other major oil producing nations to agree to reduce output at their December 6th meeting in Vienna. Adding to the ambiguity, yesterday energy officials out of Saudi Arabia, the world’s biggest exporter, announced that production increased to record levels last month.​ 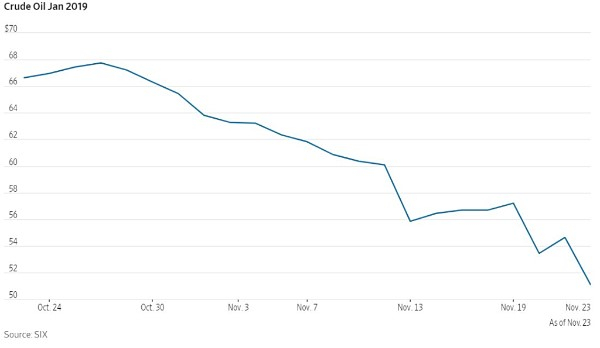 Major US equity indices were unable to record gains in today’s Thanksgiving-shortened trading session, as the DJIA dropped 0.73% on its way to a 3% loss for the week.  Treasurys maintained a steady rally throughout the day, with yields/swap rates finishing 1-2bps lower across the curve.  The benchmark 10-year note yield is poised to close the week near 3.05% – a few basis points lower than its level at the beginning of the week. 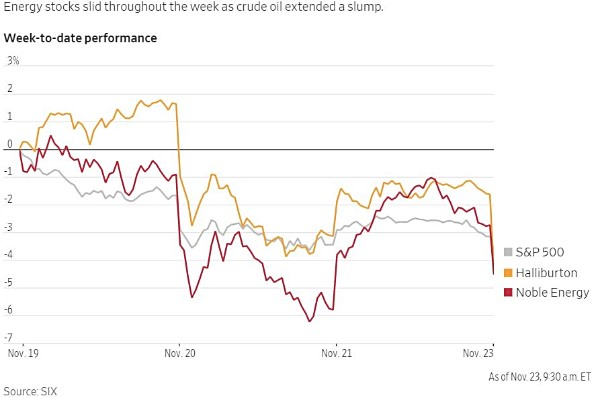 Black Friday- originally named for the traffic accidents and violence that came along with the large numbers of shoppers- is off to an auspicious start, with daily sales projected to rise 4.3% to $717.5 billion.

This year’s “Super Bowl of Shopping” comes at a defining moment for the consumer space, with many observers proclaiming the so-called “death of retail”. That said, even online retailers aren’t immune from the remarkable competition and razor-thin margins that have plagued their storefront counterparts. That margin-compression and welfare transfer to consumers has had far reaching implications, and in spite of the retail beat in Q3, consumer stocks are still down significantly from their September peak: 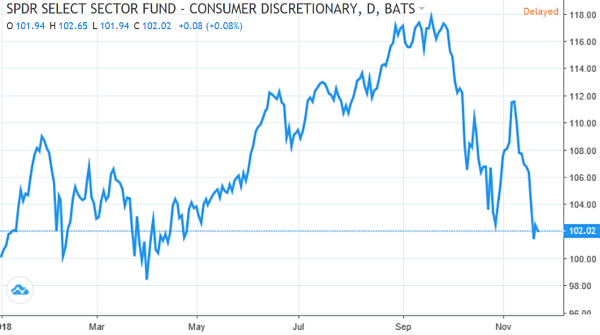 What to Look for Next Week:​

G20 summit in Buenos Aires: Global financial markets will be monitoring this event closely as President Trump and his Chinese counterpart Xi Jinping will have the opportunity for an in-person meeting with the hopes to make some progress on trade negotiations between the world’s two largest economies.  In recent weeks, Trump has remained positive on the direction of trade talks (unlike many of the members in his administration), while continuing to float the potential for increased tariffs. Speaking at a news conference this morning, Chinese Vice Commerce Minister Wang Shouwen stated his nation hopes that “on the basis of equal consultations, mutual benefits and trust, we could make common efforts to manage differences and find ways to resolve problems”.

Inflation Data: On Thursday, Personal Consumption Expenditures (PCE) will be released by the Department of Commerce.  When last reported, the core PCE (the Fed’s preferred measure of inflation) was in-line with the FOMC’s target of 2%, but is expected to fall to 1.9% YoY for October.  Barring a substantially weaker figure than median forecasts, the consumer price print is not expected to alter the Fed’s plan to hike at its December meeting, the likelihood of which currently stands at 73.5% as per Fed funds futures.