Today’s release of the ADP Employment Report showed job growth surged in September, easily beating economists’ expectations.  The report showed private companies added 230,000 jobs last month, the highest total since February, which also represented a 62,000 increase from August.  Gains were robust, with the professional and health services sectors leading the way.  It should be noted that the number may be overstated some because the ADP’s methodology ignores some of the likely job disruptions from Hurricane Florence.  Regardless, the print was strong, and supported concerns that the economy may be running at an unsustainable, overheating pace.  Expectations will be ratcheted higher leading up to Friday’s release of the all-important nonfarm payrolls report, where market pundits will look for signs of increased wage growth in addition to further evidence of a tightening labor market.  Economists are forecasting a decline in the jobless rate to 3.8%, which would be the lowest level since 1969. 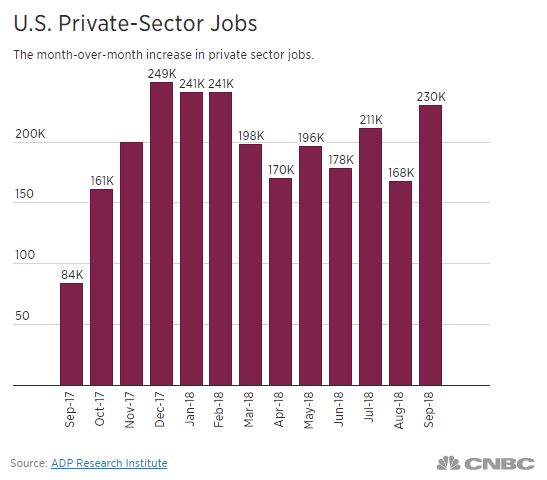 Concern over Italy’s spending plans subsided today after its economy minister said it would cut its budget deficit starting in 2020, early than previously indicated.  This news was well received by investors after it appeared earlier in the week that the Italian government was on a collision course with Brussels over its spending plans.  There is some skepticism as to how the Italian populist coalition can deliver on its pledges to increase public investment and lower taxes without violating EU budget rules.  In the meantime, Italian government bonds are recovering along with European equities. 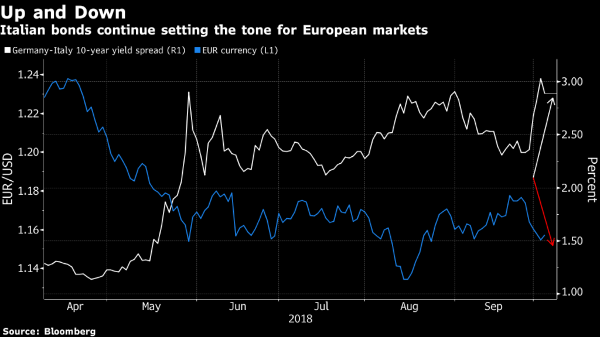 Risk appetite was elevated today throughout the session while US Treasurys traded in a bear flattening pattern off the back of US economic optimism.  US Treasury yields rose 6-12 bps across the curve with the benchmark 10-year reaching its highest level since 2011.  US equity indices finished off their intraday highs, but both the Dow and S&P closed near record highs.  Both WTI and Brent Crude traded up over 1% on the day despite the largest weekly rise of the year in US crude inventories off the back of supply concerns abroad.