Concerns over rising interest rates, increased tensions with Saudi Arabia, and geopolitical uncertainty in Europe drove major stock indices 1.27%-2.06% lower on the day.  The yield on the 2-year Treasury note briefly touched above 2.90% as the momentum from yesterday’s FOMC minutes carried into today’s trading session.  Treasurys rallied back later in the session as investors flocked towards safe haven assets after Treasury Secretary Steven Mnuchin revealed he would not be attending the “Davos in the Desert” conference in Saudi Arabia later this month.  The decision came as a result of the ongoing investigation into the death of Washington Post journalist Jamal Khashoggi, who is suspected to have been killed during an improper interrogation conducted by rogue operatives.  Also adding to the trend away from risk assets, today the European Commission ruled that recently released Italian government budget would indeed represent a breach of EU rules.  Ultimately, yields/swap rates finished the trading session 1-4bps lower, with the 10-year note yield just under 3.18%. 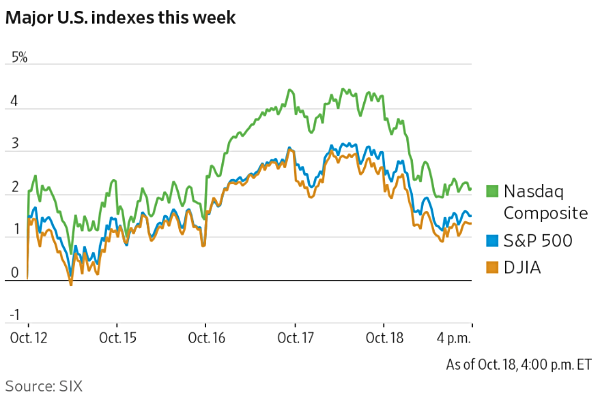 Today we heard speeches from two different members of the Fed, each with a different view as to the future path of monetary policy.  This morning St. Louis Fed President James Bullard maintained his dovish outlook with reporters as he cautioned that the Fed should refrain from leading markets to believe that more increases are approaching.  “The idea we have to pencil in a lot of rate increases, that’s what I’m objecting to,” Bullard stated while noting that inflationary pressures have remained at acceptable levels.  Bullard also suggested updates to the methodology used by the Fed in determining appropriate short-term rate levels (Taylor Rule) to include inflation forecasting data and reduce the labor market’s influence on such data.  With such changes, Bullard concluded that current rates would be at their appropriate levels “over the forecast horizon”.

This afternoon Federal Reserve Vice Chairman for Supervision Randal Quarles provided his perspective to the Economic Club of New York, which aligns more closely with the majority of the FOMC.  Quarles confirmed the necessity for gradual rate increases as “all the indicators currently are for a strong economy for a significant period into the future.”  He also supported the idea of taking into account a wider array of economic measures (in addition to inflation), such as labor utilization and production, in determining whether the economy is overheating or not.  His overall recommendation for the Fed was to “follow that course through the temporarily shifting and sometimes conflicting signs from the economy unless some strong and steady signal requires a firm but moderate correction”.

In a light day of key economic data releases, weekly initial jobless claims were reported to hold near 49-year lows as data continues to support a tight labor market.  The number of Americans filing for unemployment for the first time declined by 5,000 to a seasonally adjusted 210,000 last week.  The four-week moving average of new claims also remained near the lowest level in nearly a half a century at 211,750.  Separately, continuing claims decrease by 13,000 to 1.640 million for the week ended October 6th. 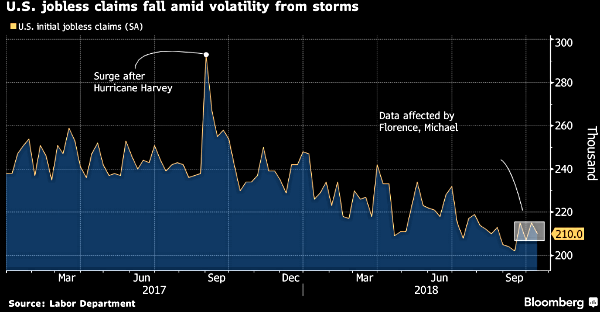