Bond Prices Down, Stocks… Also Down?

US equities retreated today from their recent historical highs as surging bonds yields stoked fears of a global tightening of liquidity / monetary policy.  The recent bond sell off comes off the back of strong underlying US economic data and hawkish comments from Fed Chair Powell ahead of tomorrow’s release of the widely-followed nonfarm payrolls report.  Investors will be watching with a keen eye for any signs of a job-driven inflationary pressure, which to this point has remained subdued despite a labor market that’s said to be nearing maximum employment.  A rise in wages would spark inflation concerns and lend support to Powell’s recent comments that the Fed may eventually need to raise rates beyond a neutral level.

The headline US jobless claims number in today’s weekly report fell by 8,000 to a seasonally adjusted 207,000, close to a 49-year low, displaying resilience despite some likely impact from Hurricane Florence.  This makes it a record 187 straight weeks that claims have been below 300k, the number traditionally associated with a healthy labor market.  While the claims number doesn’t have a direct bearing on tomorrow’s NFP report, it confirms the positive momentum for recent labor data.  Economists are forecasting a headline print of 184,000 jobs added and a 3.8% unemployment rate in September, with certain market pundits anticipating a surprise to the upside. 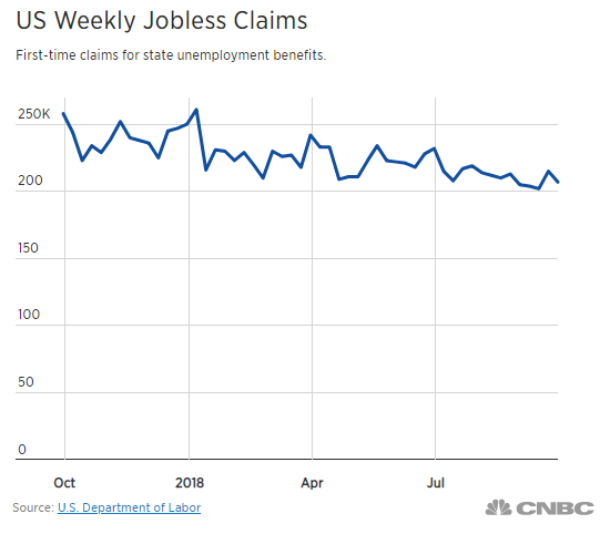 All three major US equity indices fell sharply today, with the tech-heavy NASDAQ being the biggest laggard (-1.81%), in response to fears of rates rising quicker than anticipated.  The Dow and S&P 500 finished the day down 0.75% and 0.82%, respectively.  Treasury yields closed largely unchanged from opening levels, but failed to retrace yesterday’s move and saw the benchmark 10-year briefly break above 3.20% — its highest level since 2011.  In commodities, oil futures experienced their largest one-day percentage decline since mid-August based on supply concerns, due to the potential loss of Iranian exports driven by US sanctions set to kick in next month.  Saudi Arabia and Russia are the likely candidates to expand production in order to cover the gap. 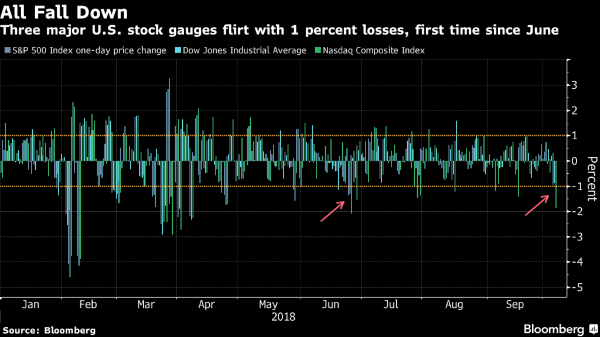