Yesterday the CEO of the UK’s Financial Conduct Authority (FCA) said they plan to phase LIBOR out as the key short term benchmark by 2021.  With over $300 trillion in outstanding financial contracts of all kinds linked to LIBOR, with many contract maturities going out 30+ years, this is not going to be an easy task.  The idea is to pick an index that is more reliable, based on actual traded volume, which would be less able to be manipulated.  That said, each country will need to create a new replacement index, figure out transition plans, gain acceptance across the respective loan / bond / swap and other related markets.  As you can see, this may play out over a very extended period of time. But at the end of the day, we are not anticipating much net impact when and if this transition may gain traction in the future. We share below an image courtesy of our friends on CS Rates Desk with further references to the source of data attributed below in the image to show you the magnitude of LIBOR’s usefulness in various financial contracts. 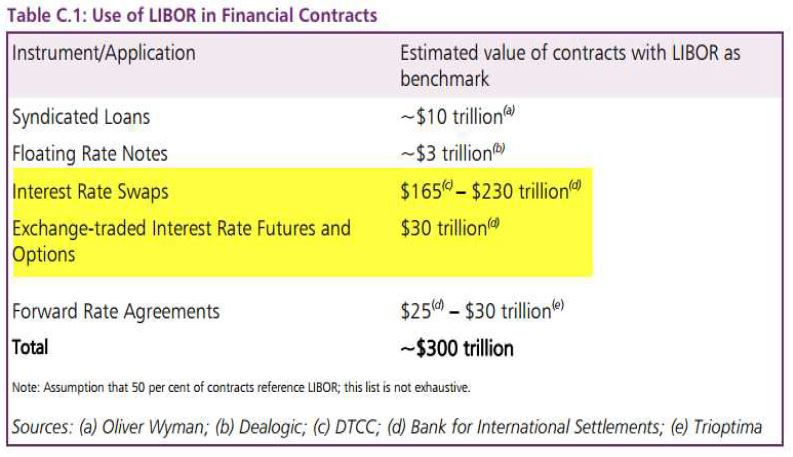 Economic data released today was highlighted by Q2 GDP which reported up 2.6% (vs. 2.7% expected), while Q1 GDP was revised 0.2% lower to a gain of 1.2%.  Personal consumption data was also released, showing a solid 2.8% increase for the 2nd quarter. Also of note today was the release of the University of Michigan Sentiment index, which recorded a 93.4 index level for July, 0.3 up from June and slightly above expectations.

Treasurys staged a modest rally today, with the yield on the 10-year note closing the week around 2.29% – down 2 bps in yield on the day.  US stocks are trading mixed today, with the Dow hitting another all-time high, despite the S&P and NASDAQ both trading down a fraction.  The technology sector took the brunt of the hit again today, after Amazon reported earnings short of market estimates for the quarter.  The US dollar fell against most major currencies today, as the Yen, Euro and Sterling will all about 0.5% stronger vs. the dollar.  WTI futures kept moving higher now approaching the technically significant $50 per barrel level.  The tone for the markets next week could be set by the US and International response to North Korea’s 2nd ICBM test launched earlier today.