Kick the Can Down the Road: Government Avoids Shutdown

Yesterday both houses of Congress voted on legislation which keeps the government funded through January 19, 2018.  Today would have been the last day the government was funded from the previous legislation.  With Congress set to take their holiday break, it was imperative that a solution was reached by today to keep services going over the holiday break.  The bill also included funds for missile defense and for repairs to the two Navy destroyers that were involved in collisions with commercial vessels earlier this year.  Now that tax legislation has been passed (signed into law by President Trump this morning), Congress will have a full plate in 2018.  In addition to funding the government longer-term, Congress will have to tackle infrastructure, and the Senate must vote on a disaster recovery bill the house approved yesterday.  This bill will bring additional funds to hurricane ravaged Texas and Puerto Rico.

Data in Support of Healthy Outlook for US Economy

Today was a busy day for economic data, beginning with the Commerce Department’s report on personal income and consumer spending for November.  Detailed in the report, consumer spending, which accounts for more than two-thirds of US economic activity, rose a higher-than-expected 0.6% last month (+0.2% in October). During the same time period, Americans’ personal saving rate declined to a 10-year low of 2.9%.  Personal income grew at a modest +0.3% pace, which was slightly lower than expectations of +0.4%.  Inflation data in the report showed gradual improvement as the PCE index, the Fed’s preferred measure of inflation, increased 0.2% in November, yielding a below-target 1.8% annualized rate.  The core PCE index managed a skinny 0.1% rise MoM and 1.5% YoY. 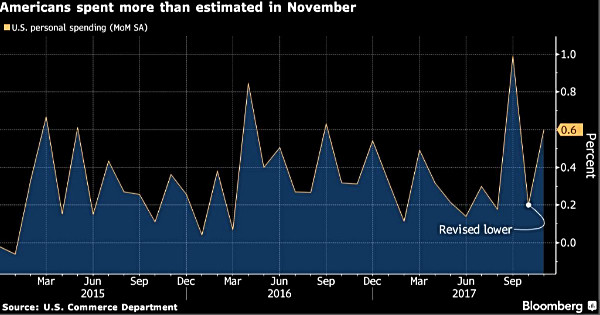 Headline durable goods orders climbed a healthy 1.3% during the month of November, albeit less than median forecasts of a 2.0% rise, boosted by orders in airplanes, motor vehicles and military equipment.  Core capital goods orders (nondefense, excluding aircrafts) slipped 0.1% (+0.4% expected), however the prior month’s reading was revised higher to a robust 0.8% gain.  Adding to the steady outlook, core capital shipments rose for a tenth straight month, up 0.2%, in support of continued strength in business investment. 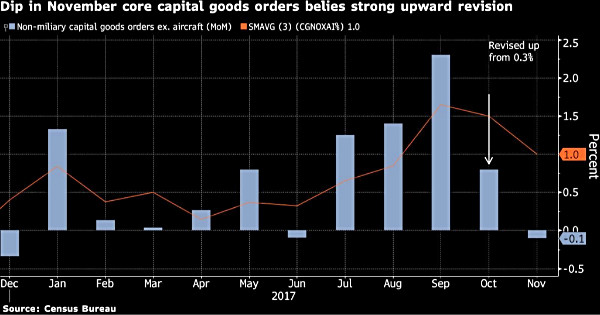 New home sales data rounded this week’s trio of housing market measures.  As reported by the Commerce Department, there was a 17.5% rise in the number of new homes sold last month, yielding a seasonally adjusted rate of 733,000 units — a new ten-year high.  The November figure blew past expectations of 655,000, and was 109,000 above the prior month’s downwardly revised pace.  Increases in purchases were largely driven by activity in the Western and Southern regions, which were both at their highest levels in the past decade.  New homes available on the market fell slightly in November to 283,000 units, and the outstanding inventory declined to a 4.6-month supply (5.4-month prior).  Also detailed in the data, the median new home sales price increased to $318,700, a 1.2% YoY gain. 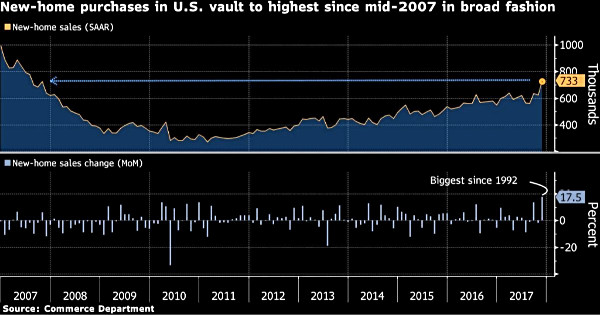 The equity markets closed early ahead of the Christmas Holiday. All three major indices were nominally lower and volume was light. The 10yr on-the-run Treasury sold off on the week closing down 37 ticks with a yield of 2.486% (up about 13bps in yield). The 10yr US Swap rate sold off roughly 13bps on the week closing near 2.47%. Crude was down slightly on the day but ended the week up about 1.6%. Have a great long weekend! 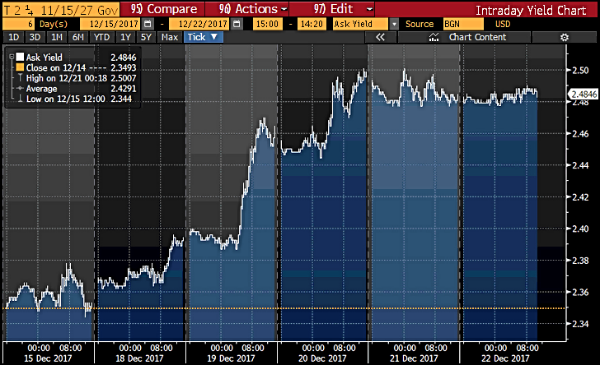