Yellen v. Summers So it’s not as exciting as Ali v. Frazier, but whoever’s economic forecast proves more true could result in vastly different implications to the global economy. Former Treasury Secretary Lawrence Summers commented today that he is worried that current monetary policy is too complacent in battling inflation. In an interview on Bloomberg, Summers commented, “…the gravity of our situation is still understated,” adding that he doubts inflation will slow to the Fed’s target of 2.0%. Current Treasury Secretary Janet Yellen was much more upbeat on the future of the U.S. economy and commented today at the World Economic Forum’s Virtual Davos Agenda that price rises provide a “valid policy concern,” but “professional forecasters think inflation will substantially abate next year.” Let’s hope that these aren’t the same forecasters who promised that inflation was “transitory.”

Bank borrowing bonanza. Just as banks started reporting Q4 earnings this week, some of the largest banks in the U.S. have been on a borrowing binge to lock in lower rates as yields surge. Thus far in 2022, financial institutions have raised $80 billion in debt, nearly double the amount at this point in 2021. Wall Street still believes issuance will fade after this initial round. Analysts estimate the bond supply within the banking sector could drop 30 to 45% year-over-year in 2022. Big risk off move drags stocks lower to end worst week in over a year. Netflix fell 22% after the tech giant warned subscriber growth would slow, pulling the Nasdaq Composite lower to end the week down 7.6%. Treasury yields and swap rates continued to pull back after last week’s sharp selloff, though they remain 20+ bps higher to start the year. 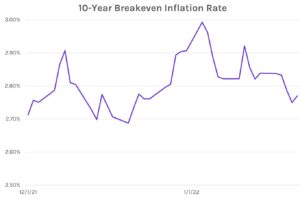