Long-dated Treasury yields dropped dramatically amid Treasury auction strength, while risk assets pull back from all-time highs. The 10-year Treasury yield dropped dramatically on the day, closing 7 bps lower at 1.54% across a flattening curve. Short-term rates ended the session little changed after initially climbing on the back of the Bank of Canada’s surprise rate hike announcement. The S&P 500 fell 0.50% in the day after hitting its all-time high yesterday. 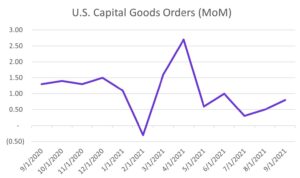 Bank of Canada announced the end of its pandemic-era bond-buying program today. Bank of Canada Governor Tiff Macklem announced an ending to the Canadian central bank’s quantitative easing program that started at the onset of the pandemic. It was also announced that rate hikes could begin as early as next April due to sticky inflation. The beginning of Canada’s tightening cycle comes ahead of The Fed’s next policy meeting, which will start next Tuesday.