Rates gap higher despite mixed jobs report- 10-year yield crosses 1.60% threshold for the first time in four months. Even a jobs number miss of over 300,000 was not enough to slow the incessant march higher in rates which shrugged off an initial rally to end the day 2-4 basis points higher across the curve. With the Fed virtually guaranteed to begin tapering their bond purchases at the next meeting, attention will quickly turn to the next hurdle – sufficient employment and inflation to justify a rate hike. In the UK that process has already begun in earnest, with markets pricing in a policy rate of 0.75% by September 2022. Domestically, US rates don’t yet indicate that aggressive of policy action, and price in the Fed’s first rate hike in November of 2022. 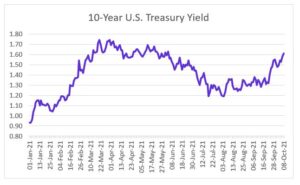 U.S. payrolls added 194,000 in September, well below analyst expectations of 500,000. For the second month in a row, U.S. added much fewer jobs than expected. However, August’s payrolls were revised upward to 366,000 compared to the 235,000 reported. Vaccine mandates could be slowing labor market participation, but economists do expect the job market to improve in the coming months as schools remain open and the safety net of federal pandemic unemployment benefits no longer available. Big data week ahead with September consumer and producer prices, the kick-off to 3Q earnings season, and the Fed’s September FOMC minutes on the docket next week On Tuesday, small business optimism and job opening data will be released. Wednesday will be a busy day with the kick off earnings season with J.P. Morgan-Chase reporting before the market opens, September consumer price data being released in the morning, and the FOMC minutes disclosed in the afternoon. Initial jobless claims and September producer prices will be available on Thursday with September retail sales closing out the week on Friday.

On Monday, markets will be closed due to the Columbus Day holiday.