October U.S. consumer prices exceed all forecasts, rise most since 1990. The headline consumer price index (CPI) increased 6.2% year-over-year while rising 0.9% from September. Energy, shelter, and vehicle costs were the primary drivers during the month, with inflationary pressures broadening as core inflation, excluding energy and food prices, increased to a 30-year high to 4.6% from the prior year. Shelter costs comprise one-third of the CPI and are now up 3.5% over the past year. 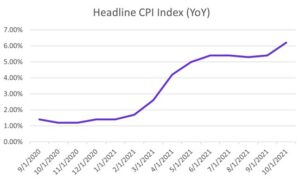 Weak demand for U.S. Treasury 30-year bond auction sends long-term rates higher. In a risk-off move, investors did not show much appetite for today’s 30-year bond auction. The poor auction sent the 30-year yield 14 bps higher to 1.96% before closing the day at 1.90%. The when-issued yield was 1.888% for the $25 billion in 30-year Treasury, but awarded at the much higher rate of 1.94%.