S&P 500 hits yet another record despite China and Turkey fears. The S&P 500 climbed 0.30% to hit its 66th record of 2021, shrugging off the emerging market jitters that pulled down virtually every other equity benchmark. Swap rates and Treasury yields were also relatively unaffected by the Turkish bank’s surprise rate cut and fears around additional real estate defaults in China, and ended the session only slightly lower. The VIX or “Fear Index” climbed for the second straight session, but remains relatively subdued at 17.6. U.S. jobless claims fell for the seventh consecutive week Initial jobless claims fell to 268,000 for the week ending 11/13, a new pandemic low, and inching toward the pre-pandemic level of ~220,000 weekly claims. The labor market has steadily improved in the past few months prompting the Fed to start tapering its bond purchasing program. However, the U.S. is still 4 million jobs short of its pre-pandemic level. 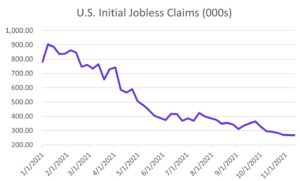 Philadelphia Fed report showed significant regional manufacturing growth in November. The Philly Fed reported its current activity index increased to 39.0 in November, up from 23.8 from the prior month and well above economists’ expectations of 24.0. A reading above 0.0 indicates growth. New orders drove the increased activity within the region with shipments also increasing during the month. The report also disclosed that manufacturers are facing historically high price increases. The prices paid and prices received indices increased significantly, with the prices received hitting its highest level since 1974.