Jobs report shows unexpected rise in nonfarm payrolls, fall in unemployment rate. The labor market defied forecasts that had called for a decline of 7.5 million jobs in the month of May, adding 2.5 million jobs while the unemployment rate fell to 13.3% (estimates had called for unemployment to peak at 19%). Average hourly earnings declined on the month, but likely as a result of a recovery in lower-wage jobs. The “U-6 rate” which represents underemployment (unlike unemployment it includes those who haven’t searched for a job recently) fell to 21.2% from 22.8% in the month prior. Treasury yields and swap rates are 2-7 basis points higher on the blockbuster report while U.S. equities are 3% higher to start the day. 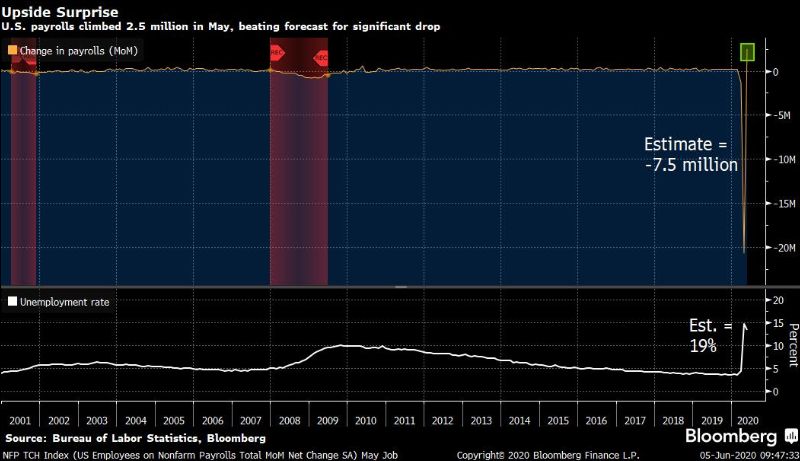 As we head into Friday, EUR gains against the dollar, on Thursday’s news of the ECB almost doubling previously announced economic stimulus of 750 billion Euros, were pared as markets reacted to the unexpected strength of the payroll data in the US. EUR/USD opened the European market session at a high of 1.1373, and as of publication has come down to 1.1296.

GBP pivoted downward from near 2 month highs briefly after Chief EU Negotiator Michel Barnier indicated that the UK has backtracked on previous commitments made in the Brexit negotiations, coupled with the US jobs report data. Pressures will likely remain unless Britain gets an extension for its June 30 Brexit transition period deadline, however, markets appear to have renewed confidence with GBP/USD hitting 1.27 after a dip at the start of the session.

Day ahead. Other than the jobs report released this morning, today is light on new economic data. The Baker Hughes rig count will be published later this afternoon, with the number of active rigs expected to increase after global demand begins to recover. President Trump will travel to Maine to visit the governor to discuss reopening plans.