Rates fall amid uneasy trade truce, China now focusing on US legislative support for Hong Kong protestors. The Senate unanimously passed legislation aimed at protecting human rights in Hong Kong amid China’s continued crackdown on the pro-democracy movement that has gripped Hong Kong for months. Pundits are unsure if President Trump will veto or sign the measure, but the legislation will complicate trade negotiations after the Chinese Foreign Ministry had made “stern representations” that the measure should not be passed into law. The 10-year Treasury yield fell 2 basis points yesterday and a further 4 basis points this morning as investors digested this new wrinkle to trade talks. The yield curve has notably flattened since last week, the spread between 10-year and 2-year Treasury yields falling to 16 basis points: 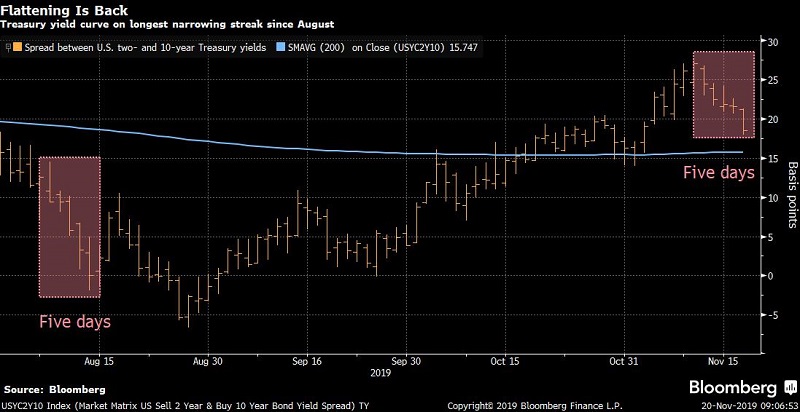 Mixed third quarter results for US retailers. Third quarter results for Walmart, Kohl’s and Target were somewhat mixed- Walmart and Kohl’s stumbling while Target posted extremely strong same-store sales. US retail results are of particular importance since they shed light on the strength of the US consumer, and in turn the strength of the US economy. The S&P 500 fell marginally yesterday amidst that backdrop, declining 0.10% on the day (and by an additional 0.14% this morning). 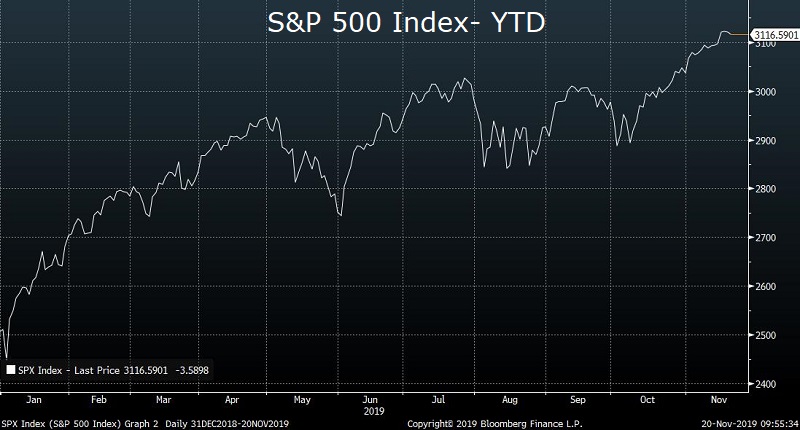 Day ahead. Minutes from the last FOMC meeting will be released today at 2pm ET. In his public comments since the last rate cut, Fed Chair Jerome Powell has said it would take a “material reassessment” of the Fed’s outlook before they’d resume cutting rates. Investors will closely parse the minutes for any hint as to what exactly would constitute “material” and for more nuanced detail around the degree of division in the Fed after two regional presidents voted against the rate cut.