Rates finished lower across the curve yesterday, equities higher amid mixed trade signals. Momentum appeared to shift late last week after White House Economic Advisor Larry Kudlow said that negotiations around a “phase one” trade deal were down to the “short strokes”. That momentum fizzled out though after China was said to be pessimistic about the prospect of a long term trade deal, and reports of President Trump’s unwillingness to roll back tariffs also surfaced. The roller-coaster ride appears to be far from over- on December 15th the US government had been scheduled to impose additional tariffs on $160B worth of goods- an escalation that could still occur if the US and China don’t agree to a phase one deal before then. The S&P 500 rose marginally higher yesterday (0.20%) while Treasury yields fell 2 basis points across the curve. 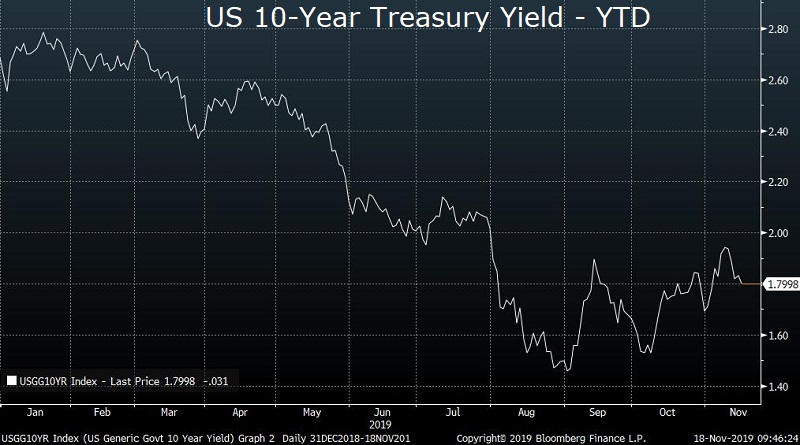 Saudi Aramco scales back IPO in sign of weakening sentiment. Saudi Aramco, Saudi Arabia’s oil conglomerate, had been set for a record global offering that was supposed to value the company at nearly $2 trillion. Those grandiose plans have now been pared back as investor demand has waned, and now Saudi Arabia will limit their offering to only $40B (down from $100B) and will only sell shares locally rather than the international sale that had been previously planned. IPO demand is often looked to as a leading indicator for investor sentiment- Aramco’s scaled back offering coming mere weeks after WeWork’s aborted IPO and as big tech IPO’s like Lyft, Uber and Peloton have fallen by double digits since their debuts. 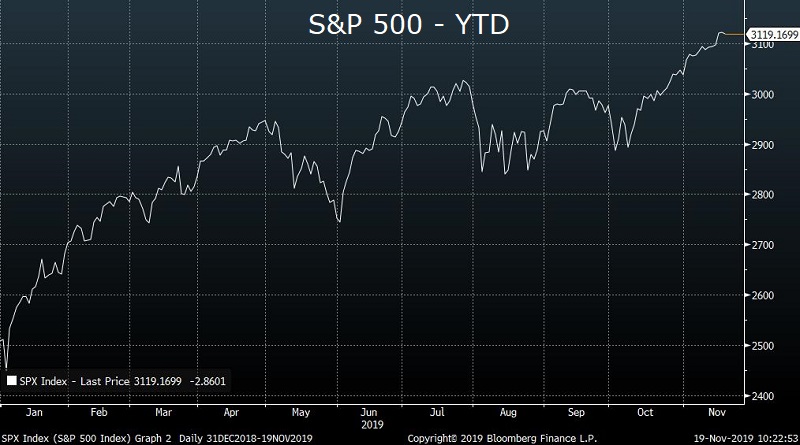 Week ahead. October housing starts data this morning came in roughly in line with expectations (1.314mm vs 1.32mm) to kick off a relatively quiet week of economic data. Tomorrow’s FOMC minutes are expected to be mostly old news after Fed Chair Jerome Powell’s testimony before Congress last week, but should provide some additional detail around the deliberations that resulted in the Fed’s latest rate cut. The most important set of data this week may be the slate of consumer companies set to report third quarter results. Investors will closely parse the results of Home Depot, Target, Lowe’s, Macy’s and Nordstrom for any clues around the health of the US consumer.