Bank of America sees net income rise, becomes latest bank to warn on rate cuts. Bank of America followed suit on its conference call today- saying it expects to generate less income from its loan portfolio if the Fed cuts rates. The bank would see net interest income fall by as much as 2% if the Fed cuts rates by 50 basis points by year end (as currently projected by fed funds futures). Like many other large banks, Bank of America also benefited from strong consumer banking and wealth management results for the latest period- helping offset lower earnings in markets businesses. The S&P Bank Index (which has lagged behind the S&P 500 by 5% this year) closed 0.067% lower while the S&P Regional Bank Index closed down 0.70% 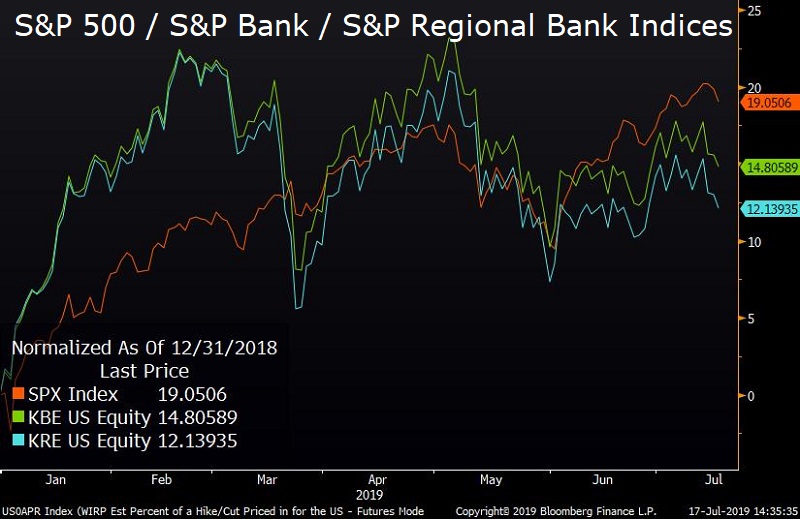 US equities fall by most in three weeks as industrials post weak earnings. The S&P 500 fell 0.65% to 2,894 while the Dow Jones Industrial Average fell by 0.42%- led lower by energy and industrials sectors. Industrials were particularly hurt, falling 2.2% as rail operators posted weak second quarter earnings. Equities are unlikely to get any immediate reprieve from a resolution to the US-China trade dispute, as media outlets report that any near term deal is stalled as the US continues to refuse to ease restrictions on the Chinese tech giant Huawei. Meanwhile, Treasurys benefited from a strong risk-off bid, with Treasury yields falling 4-6 basis points across the curve- the 10 year Treasury yield closing at 2.045%. 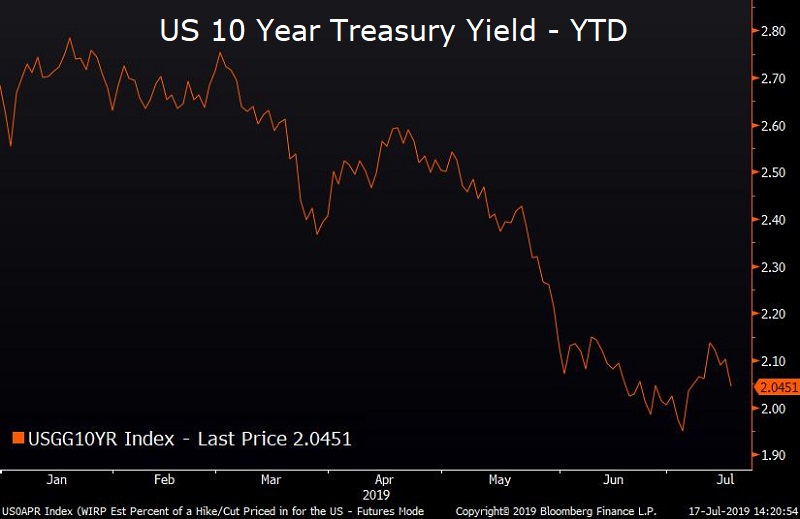 Facebook’s “Libra” currency/payment tool faces sharp criticism before House panel. David Marcus, the head of Facebook’s financial services unit, testified today before the House of Representatives after speaking to the Senate yesterday. The primary focus of the hearings was Facebook’s proposed cryptocurrency “Libra”. The testimony comes after Fed Chair Jerome Powell, President Trump and others have publicly lambasted the dependability or utility of the proposed digital currency. The House committee did not deviate from that script, pointing to the litany of issues such as anti-money laundering, inflation and hacking (amongst others) that would need to be resolved prior to a launch. Marcus did clarify that Libra is intended to function as a unit of exchange, and that Facebook does not have aspirations in the banking sector. Bitcoin, which had risen over 100% year to date has retraced much of its recent gains, falling back nearly 30% amid the negative sentiment around Libra.