Latest German factory orders show Germany is likely in recession. Factory orders dropped again in August after an extremely weak July figure. Other business surveys and GDP figures also show a potentially contracting German economy that has been harmed by global trade headwinds and structural issues effecting its automobile industry. A German recession has not always led to a contraction in the Eurozone economy, but it will certainly add to the already considerable downward pressure on rates- Germany’s 10-year Bund yield already sitting at -0.58%. 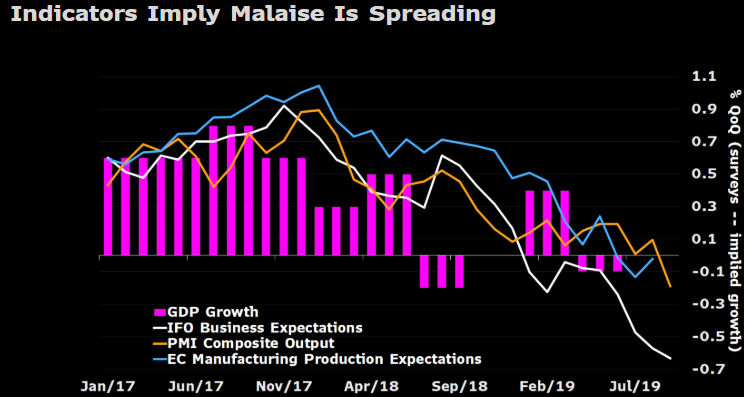 US stocks lower to start the day as trade moves back to the forefront. US stocks are lower amid a report that China would be reluctant to agree to a broad trade deal and that the scope of any potential agreement would need to be limited. That report comes after the US publicly stated last week they would only agree to a deal that was all-encompassing. The Dow Jones Industrial Average and S&P 500 are both down 0.29% and 0.20% to start the day, while Treasury yields are marginally higher across the curve.

Week ahead. Chinese Vice Premier Liu He will visit Washington for renewed trade talks with the U.S. Fed Chair Powell will speak on Tuesday at the NABE annual conference in Denver. On Wednesday, the FOMC minutes from the Fed’s September meeting will be released. The latest producer and consumer price indices will also be released on Tuesday and Thursday this week- both will be closely watched after wage inflation disappointed last Friday.