Trump’s presumptive Fed nominee backs 50 basis point cut. Judy Shelton told the Washington Post today that she would have voted for a 50 basis point rate cut at the last Fed meeting, highlighting a potential dovish pivot at the central bank after President Trump fills the two remaining vacancies on the FOMC. President Trump’s seemingly never-ending barrage of Fed criticism continued today after he tweeted that the “Fed raised & tightened far too much & too fast.” President Trump has long viewed the Fed’s policy as a headwind for the US economy as it competes with the Eurozone, Japan and other G10 economies with negative policy rates. The ECB will meet this Thursday and could possibly cut rates—intensifying political pressure on the Fed to follow suit. Fed Fund futures currently imply an 81.5% likelihood of a single 25 basis point rate cut and an 18.5% probability of a 50 basis point cut at the July 31st FOMC meeting. 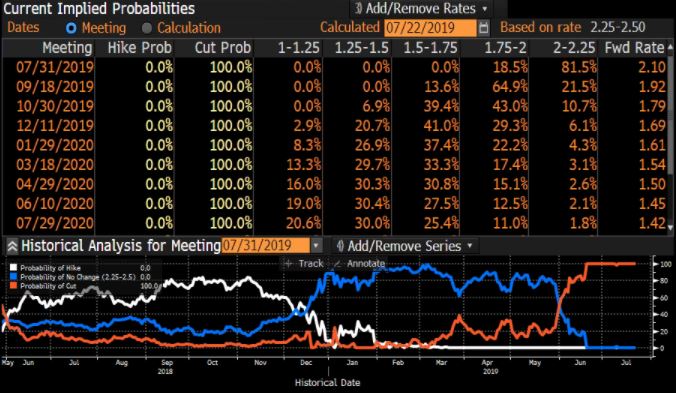 US stocks and crude rise as tensions in the Gulf remain high. The S&P 500 and Dow Jones Industrial Average rose 0.28% and 0.07% respectively, led by technology stocks as US earnings continued to roll in. US stocks have yet to be seriously hurt by the heightened tensions in the Middle East, but US crude did rise 0.83% to $56.09/barrel after the US issued new sanctions. Despite rising geopolitical tensions, the VIX or “Fear Index” remains relatively subdued at 13.5–well below its peak earlier in the year. 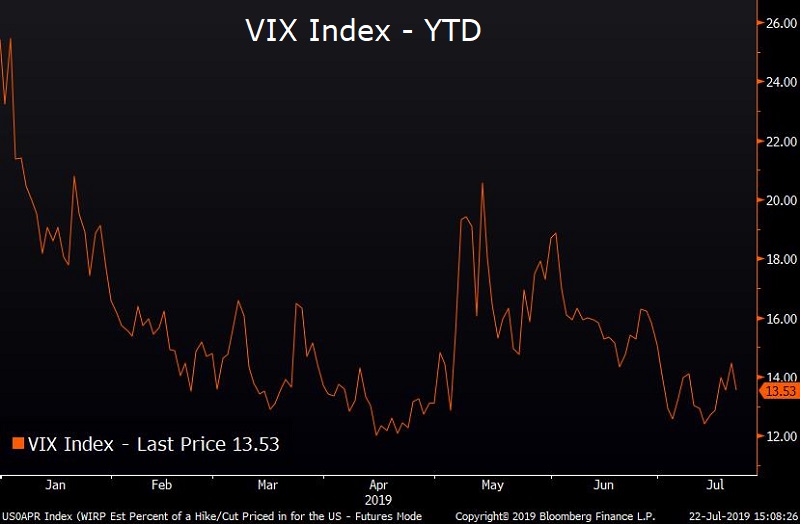 Week ahead. No Fed officials are scheduled to speak this week as the FOMC has entered its quiet period ahead of the July 31st rate decision. Tomorrow, we get an update on existing home sales for June, followed by new home sales on Wednesday. On Thursday, we get an update on durable goods orders for June, and we round out the week on Friday with a first look at Q2 GDP which is expected to show that the U.S. economy slowed to a 1.8% annual pace in the second quarter compared with a 3.1% pace in the first quarter . In US equities, blue chip stocks like Facebook and Amazon will report Q2 results.