Treasury yields continue to rise amid optimism around a preliminary trade deal between the US and China. The 10-year Treasury yield has climbed 15 basis points over the past two days to 1.86%, back into the range it occupied for much of October. Chinese President Xi Jinping added to the positive sentiment this morning, saying that the country will “continue to lower tariffs and institutional transaction costs.” Elsewhere in rates markets, Minneapolis Fed President Neel Kashkari said yesterday that he is “happy with the way the [FOMC] committee has moved over the past year”- hardly a surprise given Kashkari is considered among the most dovish members of the Fed. San Francisco Fed President Mary Daly also spoke publicly yesterday and indicated that she doesn’t believe the economy has reached its potential output- saying that inflation is still “running well below target” and that the economy has not hit “full employment.” 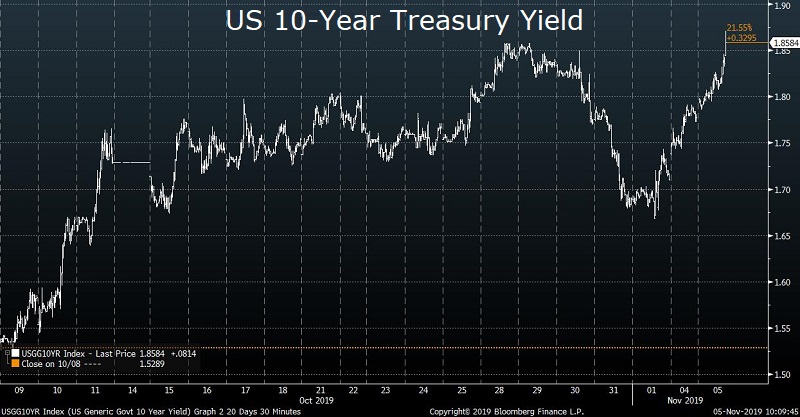 US equities look to extend record run. Fresh optimism around trade negotiations helped US stocks hit yet another record yesterday as the S&P 500 rose 0.4%- extending last week’s all-time closing high. The S&P 500 now sits 22.8% higher on the year, within shouting distance of its best result of the last decade, which came in 2013 (26.40%).

Day ahead. October’s services and composite PMI’s came in slightly lower than expected at 50.6 (vs estimates for 51.0), while the ISM Non-Manufacturing Index showed an October reading of 54.7, much better than estimates of 53.5. Today’s Fed speakers include Richmond Fed President Thomas Barkin, Dallas Fed President Robert Kaplan and Minneapolis Fed President Neel Kashkari.