US House of Representatives passes measure backing pro-democracy movement in Hong Kong, leading Chinese to threaten retaliation. Markets have long feared the protest movement in Hong Kong spilling into trade negotiations- President Trump and his counterpart Xi Jinping having avoided the topic thus far. The nonspecific threat of “strong countermeasures” by the Chinese sent futures lower this morning. Treasurys reversed yesterday’s move on the news (and a negative surprise in retail sales), rates sitting 4-5 basis points lower to start the day. Amid all the volatility rates are nearly back to where they were a month ago- 10-year Treasury yields now sitting at 1.73%. 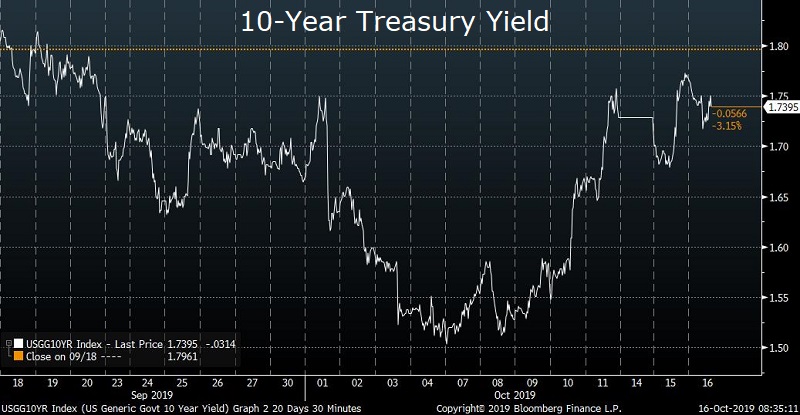 Deeper dive into earnings shows credit quality remains strong across banks. JPMorgan, First Republic and Citi all said credit quality remained strong across their loan portfolios. Even Goldman Sachs, who had posted larger than expected provisions for credit losses, noted that the provisions were impacted by four idiosyncratic corporate issues and was not a broad-based trend in their consumer portfolio. This morning Bank of America, Comerica, US Bank and PNC all posted quarterly earnings that beat estimates. Better than expected loan growth helping to offset interest rate pressures has been a common theme across bank earnings thus far. 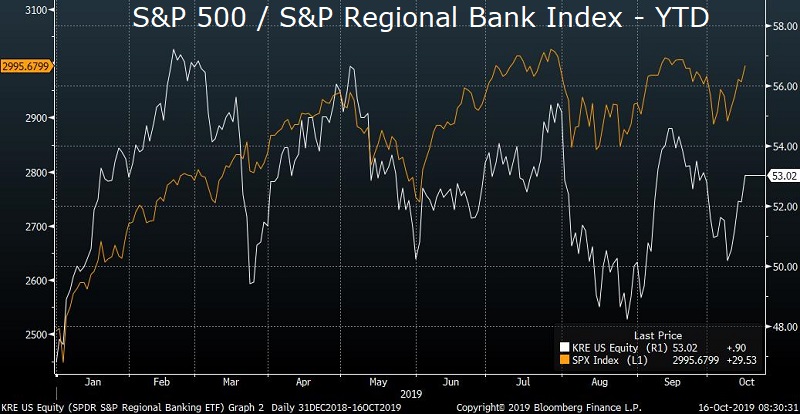 Brexit talks appear to go down to the wire. Optimism that surrounded Brexit negotiations has fizzled out slightly as UK Prime Minister Boris Johnson struggles to win the support of Northern Ireland’s Democratic Unionist party. The EU and UK have been seeking ways to avoid a hard border between the UK and Ireland as part of the Brexit agreement, and it remains a sticking point ahead of any deal. Johnson will need a deal approved by the House of Commons by Saturday if he’s to meet the October 31st deadline. The FTSE 100 is currently sitting lower 0.10% on the day.