U.S. equities tumble nearly 3% as China devalues currency, further escalating trade war. The Dow Jones Industrial Average and S&P 500 both fell nearly 3% after the Chinese Yuan breached a key level of 7 CNY/USD to start the trading day. The People’s Bank of China had previously defended this level, and the Chinese currency ended the day at 7.032 CNY/USD, leading President Trump to label the price move as “currency manipulation.” The escalation in already strained trade relations triggered a massive sell-off in US equities and a big spike up in the VIX or “Fear Index” which ended the day up nearly 7 points to 24.6—the highest level since January. 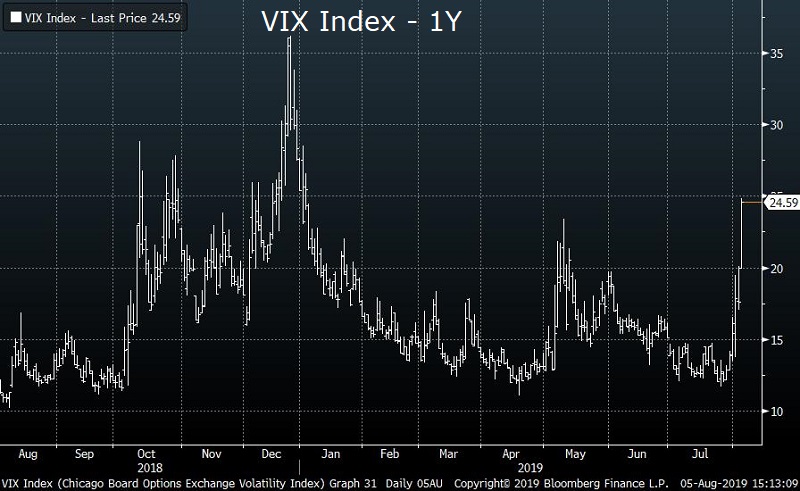 Treasurys skyrocket, pushing yields and swap rates down 13-18 basis points across the curve. Continued fears around trade tensions led a sizeable risk-off bid to Treasurys today. Yields fell over 13 basis points across the curve as the ten year treasury yield dipped to 1.71%. Swap rates also plunged with ten year swap rates falling by nearly 18 basis points to 1.59%–over 60 basis points below current 3 month LIBOR. With domestic growth positive and unemployment at all-time lows, any return to a more normal rate environment would likely have to be prompted by rising inflation, but markets have recently marked down inflation expectations as well with 5-year and 10-year breakevens inflation rates below 1.6%. 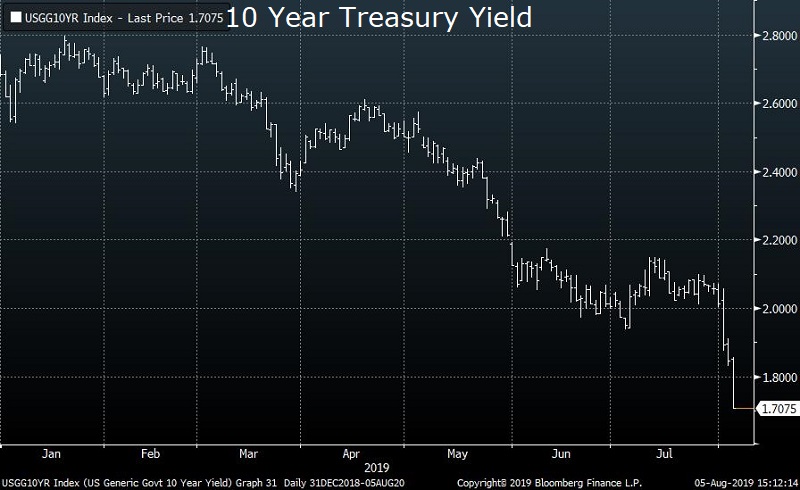 The week ahead. While trade tensions will undoubtedly be center stage this week, there are some non-trade related items on this week’s agenda. Tomorrow, St. Louis Fed President James Bullard will speak about U.S. monetary policy at an event in DC, and Chicago Fed President Charles Evans will speak Wednesday morning. We also get an update on wholesale inflation this week when the government reports on July producer prices on Friday.