Trump tweet on new tariffs sends markets into tailspin. President Trump’s tweet that the U.S. will levy a new 10% tariff on an additional $300 billion of Chinese goods sent markets into a frenzy only a day after the Fed surprised markets with its relative hawkishness. President Trump appeared to try and soften the tariff, characterizing it as “small” and that talks earlier this week were “constructive.” Nonetheless, U.S. equities were whipsawed by the surprise announcement. The S&P 500 and Dow Jones Industrial Average gave back earlier gains of 1% to close down 0.90% and 1.05% respectively. Notably, the VIX or “Fear Index” climbed to 17.87. 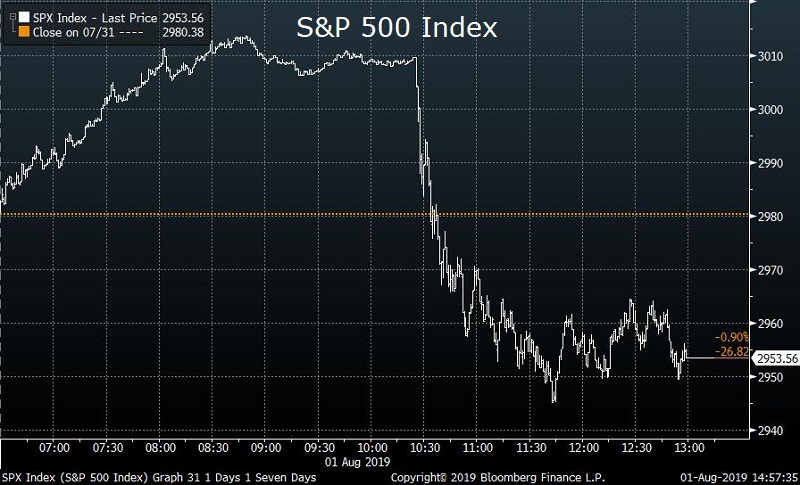 Treasury yields and swap rates fall over 13 basis points across the curve on trade fears. Rates started the day on a softer note following this morning’s disappointing  jobless claims data and ISM manufacturing report which showed the factory sector expanded at the slowest pace in 3 years last month, but the decline in rates gathered steam after President Trump’s tweet, with rates plunging an additional 10+ bp.  Fears that rising trade tensions will weigh on global growth pulled the 10 year Treasury yield down to 1.89% –the lowest level since November 2016. 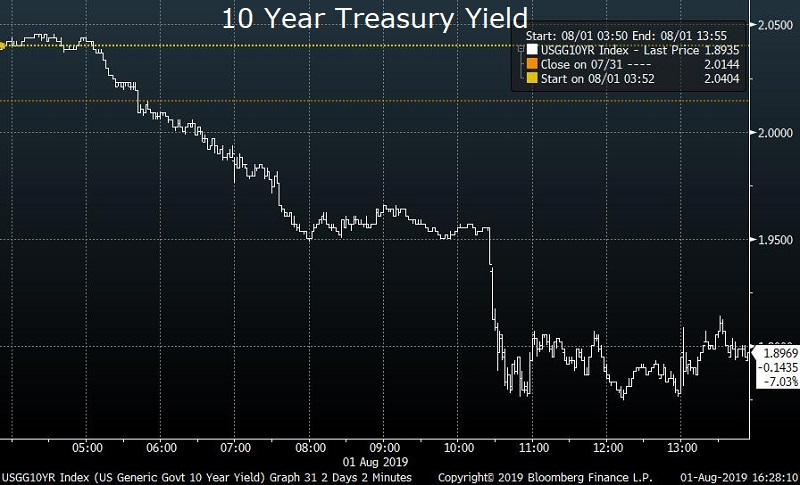 Nonfarm payrolls preview. With the Fed’s somewhat hawkish press conference already in the rearview mirror, markets will turn their attention to the next rate decision in September. The July payroll report will come out tomorrow after two extremely volatile months.  Given the sharp decline in rates this week, tomorrow’s report could have an outsized impact on the bond market. Other labor market indicators, such as ADP report on private-sector and consumer confidence, point to a strong number. Current consensus estimates call for a 165,000 gain in payrolls while the unemployment rate is expected to remain steady at 3.7%.