One and done? Fed cuts rates by 25 bps but underwhelms with lack of forward guidance. As expected, the Federal Open Market Committee cut interest rates this afternoon for the first time since December 2008, citing “implications of global developments for the economic outlook as well as muted inflation pressures .” However, the Committee’s decision to lower the target range for its overnight rate by 25 bp to 2.00% – 2.25% and end its balance sheet reduction two months earlier than expected was not unanimous. Two FOMC members, Boston Fed President Eric Rosengren and Kansas City President Esther George, cast dissenting votes with both preferring to keep rates unchanged to prevent financial instability. Additionally, no members voted in favor of a 50 bp cut, an outcome that the market considered possible heading into the meeting. The market was also caught off guard by the relative lack of dovishness in the FOMC statement and Fed Chair Powell’s ensuing press conference. Those looking for an aggressive policy easing cycle (3-4 cuts priced into the markets by the end of 2020) didn’t get confirmation of any additional easing beyond this first “insurance cut.” In his press conference, Powell avoided specifics about future rate plans and characterized this cut as a “mid-cycle” adjustment to policy. The Treasury curve flattened significantly as 2-year Treasury yields closed 4 bps higher after climbing as much as 10 bps while 10 year yields fell by 5 basis points. The spread between 10 year and 2 year rates fell to 14 bps- the flattest the curve has been since April of this year. 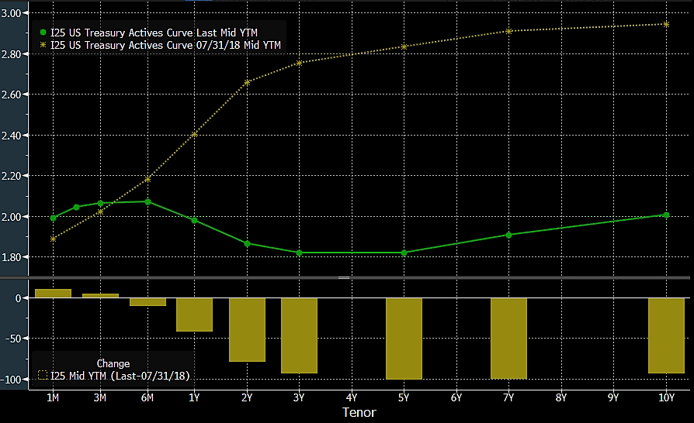 US equities fall during volatile Fed day. The S&P 500 and the Dow Jones Industrial Average had originally climbed to start the day but were disappointed by Powell’s unwillingness to commit to future rate cuts, ultimately falling 1.09% and 1.23% respectively. Speculation of future rate cuts has been one the catalysts propelling U.S. equity markets to successive record highs with major equity indices posting year-to-date gains of greater than 20%.  The VIX or “Fear Index” has also remained low, but ticked notably higher today to 16.12. The S&P Regional Bank Index fell 0.49% on the day as term rates fell, though it is still up 18.39% so far this year. 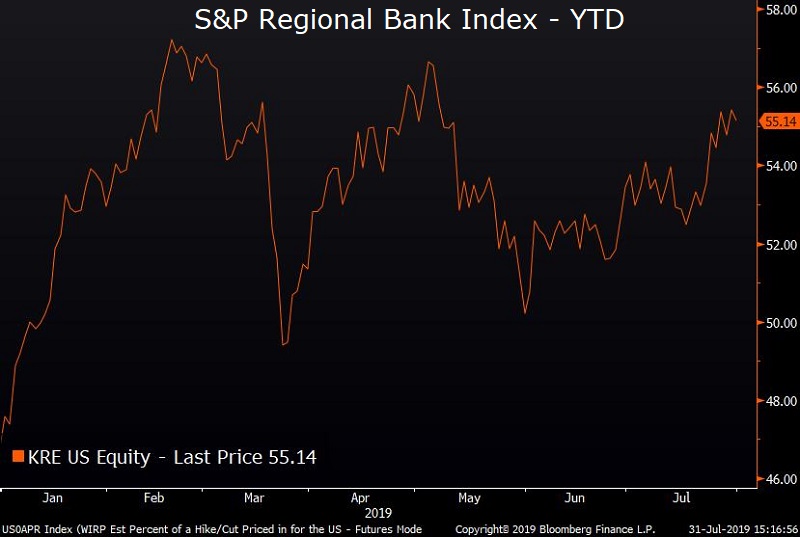 US-China trade talks end with no deal in sight. Treasury Secretary Steve Mnuchin and U.S. Trade Representative Robert Lighthizer are returning to the U.S. after two days of talks in China with little to show for their efforts. The negotiations had been billed as a restart of talks that fizzled out months back after a tumultuous G20 summit. However, the lack of progress in the talks suggests that China may be in no hurry to make concessions in a trade deal. How soon a resolution can be met remains to be seen, but an agreement may not be reached until the U.S. or Chinese economy feel a substantial impact from trade tariffs.