• Unemployment rate declined to 8.4% (9.8% EXP) from 10.2% in July • Non-farm payrolls grew by 1.371 million (1.4mm EXP), driven by hirings in the retail trade, business services, leisure and hospitality, and education sectors. A temporary increase in government employment for the 2020 Census also helped gains.

Overall, substantial improvement in employment will still be required to recover from the pandemic’s downturn, where payrolls dropped by 1.373M and a record 20.787M in March and April 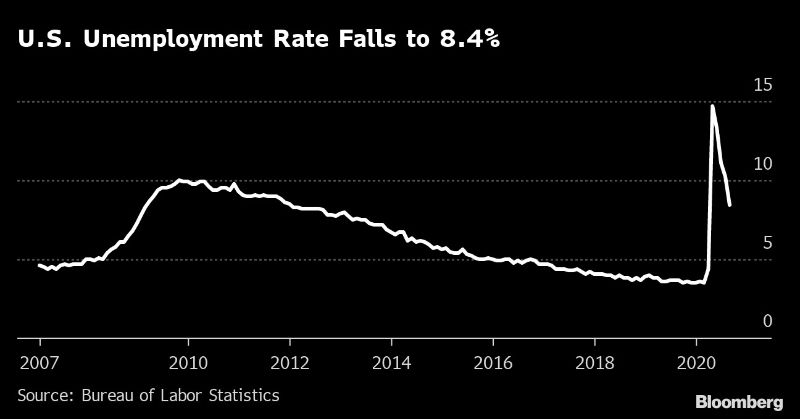 Major indices post losses driven by a decline in tech. US stocks plummeted during yesterday’s session as the seemingly never-ending summer stock rally took a breather. After closing at record highs for the past few days, the S&P 500 fell 3.5% with all 11 sectors showing declines. The DJIA dropped 2.8% after rising to pre-pandemic highs earlier in the trading session, and the Nasdaq fell dramatically, closing 5% lower on the day (but remains up nearly 28% in 2020).

FX Friday. Heading into Labor Day weekend, the positive August US jobs report data strengthened the dollar against major currencies even amidst the backdrop of Thursday’s broad-based equity selloff, which was the market’s worst loss since June. The market’s view on long-term prospects remained negative amid the continuing message from the Fed to keep rates low for the foreseeable future.

The pound has given up its early week positions, which reached an 8 month high of 1.3479 against the dollar on Tuesday, before extending downwards to 1.32. Continued Brexit uncertainty and persisting fears related to the coronavirus pandemic have placed continued pressure on pound sterling. BOE policymakers also warned that the UK economy could stand to be worse off than what’s been projected thus far.

CAD strengthened to a 7 month low against the dollar during Wednesday overnight sessions, reaching 1.3038 before losing steam and correcting sharply, reaching a high of 1.3157 during Thursday’s US morning stock market sell-off. The Canadian dollar’s gains are largely attributed to US dollar weakness over the last several months and not on the BOC’s monetary policy or crude price rebound. The jobs report pared some gains for CAD Friday morning, but stabilized around 1.31.

US financial markets are closed on Monday in observance of Labor Day. Have a great long weekend everyone!