Brent crude rises by most since 1990 Kuwait invasion after drone attack on Saudi Arabia. The attack will halve Saudi oil output for months to come, greatly constraining supply and leading Brent crude higher to $66/barrel- nearly 11% higher on the day. The output drop is the single greatest drop in supply from a single incident ever, and equates to nearly 5% of global supply. While the short-term disruption to oil production will certainly be a headwind for the global economy, the greater risk is an increase in geopolitical instability in the Middle East region. President Trump’s tweets typified this heightened risk, tweeting that the US is “locked and loaded” following the attack. 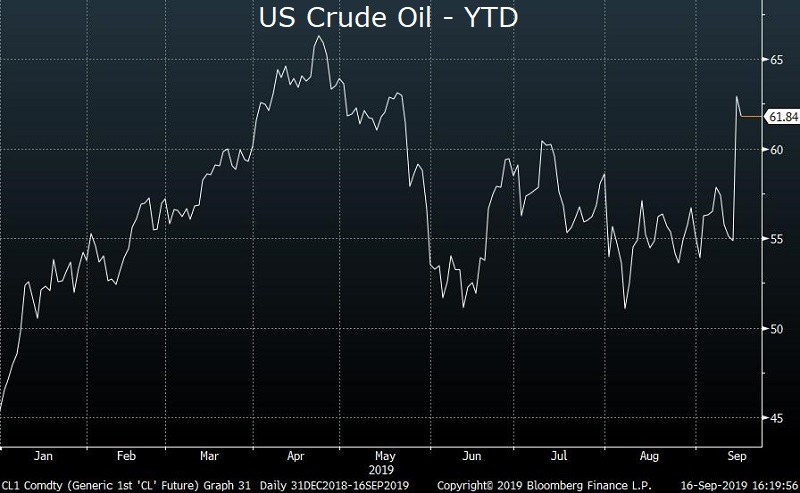 Treasurys benefit from flight to quality, yields and rates falling across the curve ahead of FOMC meeting. Treasurys benefited from a safe haven bid on the day, yields falling 4-5 basis points across the curve. The spread between 2 year and 10 year yields remained at 10 basis points, and Fed Funds futures continued to price in a near 100% likelihood of a single 25 basis point rate cut on Wednesday. The most recent sell-off (which has backed up rates nearly 40 bps from the year-to-date lows) is still pricing in two more rate cuts before the end of 2019. 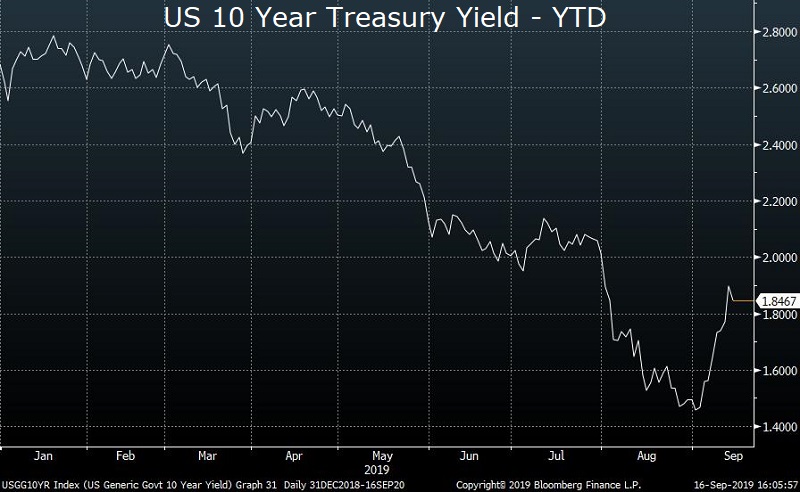 Week ahead. Tomorrow markets will get the latest industrial production and manufacturing production figures for the month of August. Both measures are expected to rise modestly after a contraction in the prior month. Wednesday will bring the latest housing starts and building permits data, also expected to rebound after a weak July. The highlight of the week will be Wednesday’s FOMC rate decision followed by Chairman Powell’s testimony. Rounding out the week will be speeches by three different FOMC members- John Williams, Eric Rosengren and Robert Kaplan all will speak on Friday.