Risk assets pare gains as reports question progress in Moderna COVID-19 vaccine.  After their sharp rally on Monday, equities pulled back as concerns around Moderna Inc.’s vaccine trial spread through the market.  Helen Branswell from STAT, a medical news website, wrote, “While Moderna blitzed the media, it revealed very little information – and most of what it did disclose were words, not data. That’s important: If you ask scientists to read a journal article, they will scour data tables, not corporate statements. With science, numbers speak much louder than words.”  The news tempered optimism that had pushed equities higher the previous days, the S&P 500 and Dow Jones ultimately declining by 1% and 1.6% respectively.  Treasury yields and swap rates fell — the 10-year closing down 3 basis points and is trading higher this morning at 0.70%. 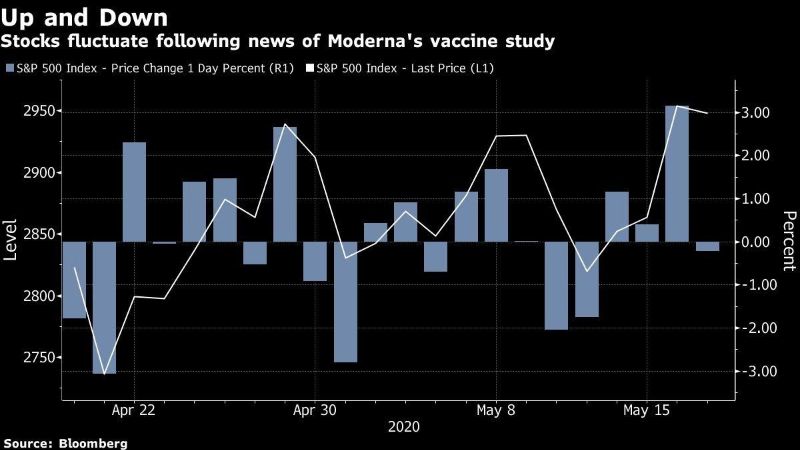 Fed Chair Jerome Powell pushes for Congressional action.  During the coronavirus briefing, Powell stayed consistent with his previous comments, adding that Congress must act soon in order for the US to begin the recovery process in the second half of the year.  Treasury Secretary Steven Mnuchin, also part of the briefing, said he was open to increased aid and is currently looking into easing some of the rules for PPP qualification.  As of now, the Fed has created nine lending facilities backed by the Treasury, with the Main Street Lending Program set to begin operations by the end of the month.  In regards to the risk the government is taking on by supporting these facilities, Mnuchin eased concerns by commenting, “We are fully prepared to take losses in certain scenarios on that capital.” 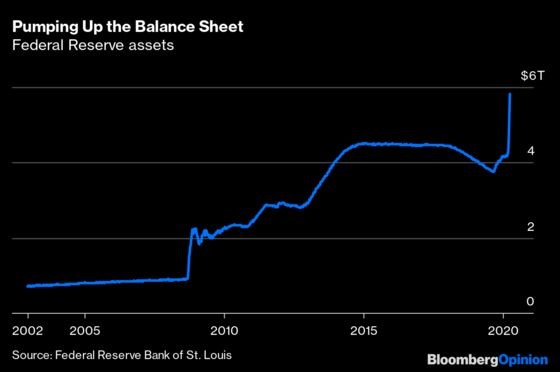 ECB believes eurozone GDP could fall by 12%.  ECB chief economist Philip Lane shared his eurozone economic outlook, adding that real GDP could plummet 12% in a severe scenario.  He defended his prediction by adding that the ECB “must ensure our monetary stance provides sufficient accommodation and guards against the escalation of tail risks associated with procyclical financial amplification mechanisms.”  Lane is prepared to update his outlook and adjust ECB policy if warranted.  To combat such a severe downturn, the ECB is considering increasing the size of their 750B euro pandemic emergency purchase program and lowering their benchmark rate into negative territory. 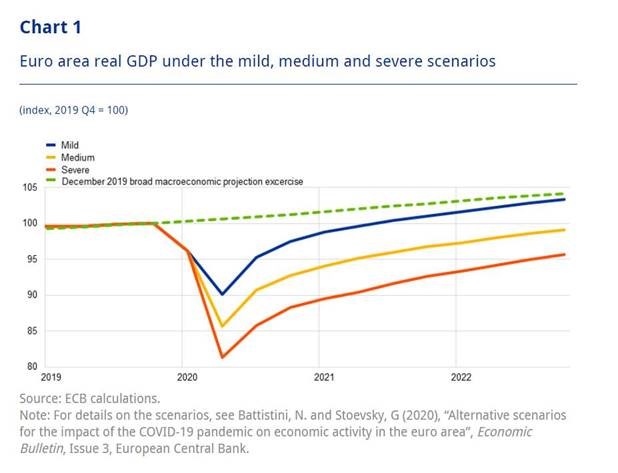 Day ahead.  Later this morning, the EIA will provide their weekly figure on crude inventories in the US.  With states beginning to reopen, economists expect inventories to continue to decline as demand for oil begins to increase.  This afternoon, the FOMC will release the minutes from their last meeting in April.  Though the Fed reports policy changes directly after their meetings, the minutes could provide a closer look at the current economic outlook and hint at future decisions.  Atlanta Fed President Raphael Bostic and St. Louis Fed President James Bullard will comment on the current economic outlook.  The first 20-year Treasury bond in 35 years will begin trading this afternoon.